The spinal column is one of the most vital parts of the human body, supporting our trunks and making all of our movements possible. Its anatomy is extremely well designed, and serves many functions, including:

All of the elements of the spinal column and vertebrae serve the purpose of protecting the spinal cord, which provides communication to the brain and mobility and sensation in the body through the complex interaction of bones, ligaments and muscle structures of the back and the nerves that surround it.

The normal adult spine is balanced over the pelvis, requiring minimal workload on the muscles to maintain an upright posture.

Loss of spinal balance can result in strain to the spinal muscles and spinal deformity. When the spine is injured and its function impaired, the consequences may be painful and even disabling.

Regions of the Spine

Humans are born with 33 separate vertebrae. By adulthood, we typically have 24 due to the fusion of the vertebrae in the sacrum. 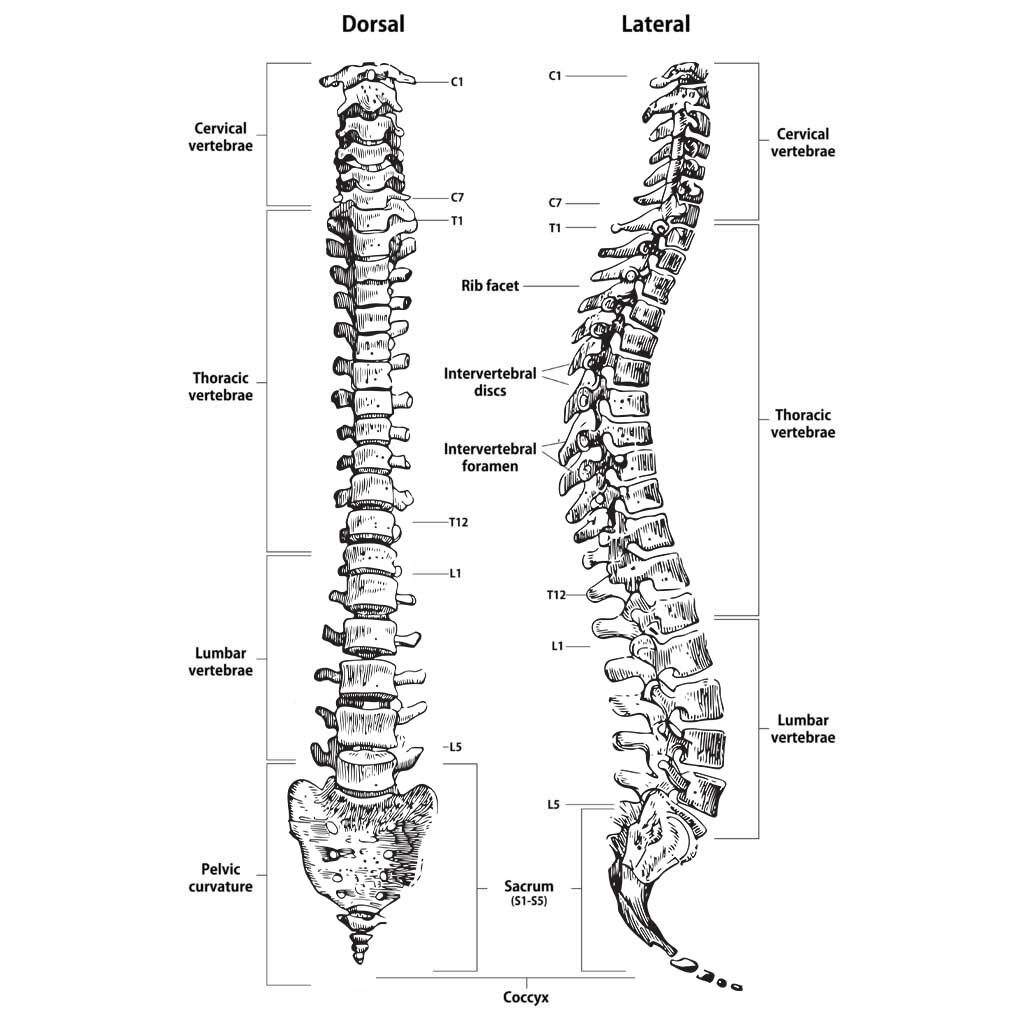 When viewed from the front or back, the normal spine is in a straight line, with each vertebra sitting directly on top of the other. Curvature to one side or the other indicates a condition called scoliosis.

When viewed from the side, the normal spine has three gradual curves:

These curves help the spine to support the load of the head and upper body, and maintain balance in the upright position. Excessive curvature, however, may result in spinal imbalance.

Elements of the Spine

The elements of the spine are designed to protect the spinal cord, support the body and facilitate movement. 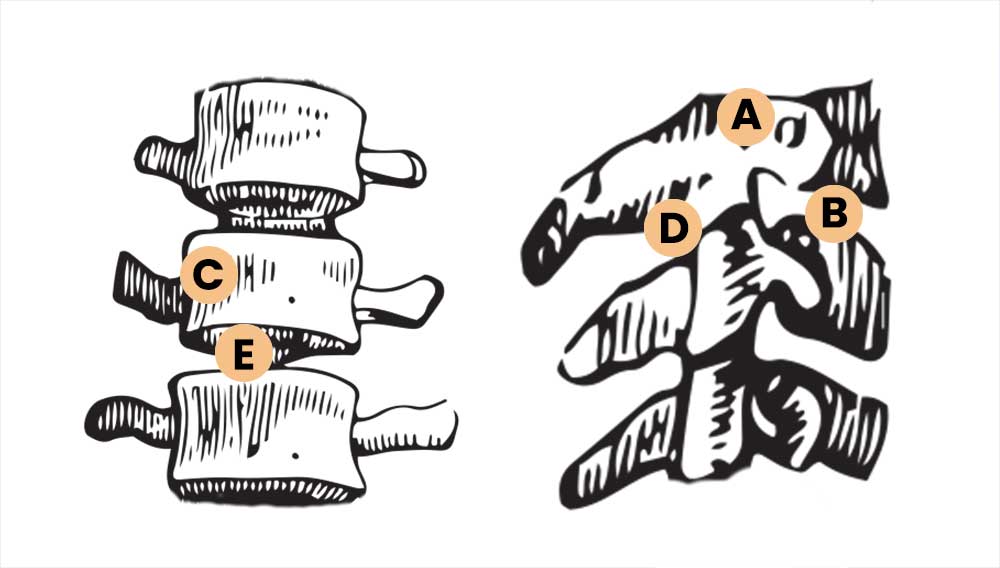 A. Vertebrae – The vertebrae support the majority of the weight imposed on the spine. The body of each vertebra is attached to a bony ring consisting of several parts. A bony projection on either side of the vertebral body called the pedicle supports the arch that protects the spinal canal. The laminae are the parts of the vertebrae that form the back of the bony arch that surrounds and covers the spinal canal. There is a transverse process on either side of the arch where some of the muscles of the spinal column attach to the vertebrae. The spinous process is the bony portion of the vertebral body that can be felt as a series of bumps in the center of a person’s neck and back.
B. Intervertebral Disc – Between the spinal vertebrae are discs, which function as shock absorbers and joints. They are designed to absorb the stresses carried by the spine while allowing the vertebral bodies to move with respect to each other. Each disc consists of a strong outer ring of fibers called the annulus fibrosis, and a soft center called the nucleus pulposus. The outer layer (annulus) helps keep the disc’s inner core (nucleus) intact. The annulus is made up of very strong fibers that connect each vertebra together. The nucleus of the disc has a very high water content, which helps maintain its flexibility and shock-absorbing properties.
C. Facet Joint – The facet joints connect the bony arches of each of the vertebral bodies. There are two facet joints between each pair of vertebrae, one on each side. Facet joints connect each vertebra with those directly above and below it, and are designed to allow the vertebral bodies to rotate with respect to each other.
D. Neural Foramen – The neural foramen is the opening through which the nerve roots exit the spine and travel to the rest of the body. There are two neural foramen located between each pair of vertebrae, one on each side. The foramen creates a protective passageway for the nerves that carry signals between the spinal cord and the rest of the body.

E. Spinal Cord and Nerves – The spinal cord extends from the base of the brain to the area between the bottom of the first lumbar vertebra and the top of the second lumbar vertebra. The spinal cord ends by diverging into individual nerves that travel out to the lower body and the legs. Because of its appearance, this group of nerves is called the cauda equina – the Latin name for “horse’s tail.” The nerve groups travel through the spinal canal for a short distance before they exit the neural foramen.

The nerves in each area of the spinal cord are connected to specific parts of the body. Those in the cervical spine, for example, extend to the upper chest and arms; those in the lumbar spine the hips, buttocks and legs. The nerves also carry electrical signals back to the brain, creating sensations. Damage to the nerves, nerve roots or spinal cord may result in symptoms such as pain, tingling, numbness and weakness, both in and around the damaged area and in the extremities.

Many muscle groups that move the trunk and the limbs also attach to the spinal column. The muscles that closely surround the bones of the spine are important for maintaining posture and helping the spine to carry the loads created during normal activity, work and play. Strengthening these muscles can be an important part of physical therapy and rehabilitation.

All of the elements of the spinal column and vertebrae serve the purpose of protecting the spinal cord, which provides communication to the brain, mobility and sensation in the body through the complex interaction of bones, ligaments and muscle structures of the back and the nerves that surround it.

The true spinal cord ends at approximately the L1 level, where it divides into the many different nerve roots that travel to the lower body and legs. This collection of nerve roots is called the cauda equina, which means “horse’s tail,” and describes the continuation of the nerve roots at the end of the spinal cord.

The bones of the skull and face are designed to protect the brain, provide structure for the face, and form the openings through which food, water, and air enter the body.

Did you know that the skull actually consists of 22 bones? Of these bones, eight make up surround and protect the brain, and the remaining 14 form the underlying structure of the face. The important elements of the human skull include:

The eight bones of the cranium form the “vault” that encloses the brain. They include the frontal, parietal, occipital, temporal, sphenoid and ethmoid bones.

In adults, all but one of the 22 bones of the skull are fused together by immovable joints called sutures. The sutures lock the edges of the skull bones together, like pieces in a puzzle, to form a structure that is both rigid and strong. The mandible, or lower jaw, is the only bone in the skull that moves, and it allows the mouth to open and close.

In newborns, the skull bones are not completely fused, but linked by soft, fibrous membranes called fontanels. Fontanels allow the skull to be compressed slightly during birth and accommodate growth of the brain during early infancy. By 18-24 months, the skull sutures typically have formed and the fontanels have disappeared.

The 14 facial bones provide structure for the face and form the openings through which food, water, and air enter the body. Each of the following facial bones are paired: the maxillae form the upper jaw and front of the hard palate; the zygomatic bones form the cheeks; the nasal bones form the bridge of the nose; the lacrimal bones form part of the orbit, or eye socket; the palatine bones form the rear of the hard palate and the inferior nasal conchae divide the nasal cavity. The vomer is a single bone that makes up part of the nasal septum, which divides the nostrils. The two bones of the mandible form the lower jaw, and both the maxillae and mandible anchor the teeth.

Small holes in the skull bones, called foraminae, enable blood vessels, such as the carotid arteries and nerves, to enter and leave the skull. The spinal cord passes through the largest hole, called the foramen magnum, in the base of the cranium to join the brain. The occipital condyles on either side of the foramen magnum articulate with the first vertebra (C1) of the spine to permit up-and-down movement of the head.

The nervous system is the communications network that controls and coordinates the muscle, organ and sensory function that takes place within our bodies.

The central nervous system (CNS), made up of the brain and spinal cord.

The brain is the control center of the nervous system. It enables us to think, feel, and move. The brain constantly receives information and sends out instructions to the body through the spinal cord and the body’s vast network of nerves.

The largest part of the brain is the cerebrum, which controls the most sophisticated functions, such as thought, imagination, memory, emotion, speech and sensory perception. The human cerebrum is quite large. It has two halves, or hemispheres. A band of nerve tissue, called the corpus callosum, links two halves to allow them to exchange information. Each hemisphere is covered by a layer of gray tissue, called the cerebral cortex, which is responsible for the higher functions of the brain, including conscious thought. The cortex is composed of sulci (folds) and gyri (bulges), which together provide a large surface area in the limited space inside the skull.

The brain stem and hypothalamus control automatic processes, such as breathing and heartbeat.

The cerebellum acts as a “mini brain” that coordinates body balance, posture and movement.

Brain tissue is soft and delicate, and requires protection. In addition to the protection provided by the skull, the brain is surrounded by: the connective tissue membranes, or meninges: the dura mater; the arachnoid mater and the pia mater. Beneath the arachnoid mater is a wide space filled with cerebrospinal fluid. This fluid forms a liquid cushion that reduces the weight of the brain and protects it from knocks and jolts. It also helps the brain receive nourishment.

The spinal cord extends from the base of the brain to the area between the bottom of the first lumbar vertebra and the top of the second lumbar vertebra. It is enclosed in and protected by the bony vertebral column, and its main function is the transmission of neural inputs between the peripheral nervous system and the brain.

The nerves in each area of the spinal cord are connected to specific parts of the body. Those in the cervical spine, for example, extend to the upper chest and arms; those in the lumbar spine the hips, buttocks and legs. The nerves also carry electrical signals back to the brain, creating sensations.

The spinal cord ends by diverging into individual nerves that travel out to the lower body and the legs. Because of its appearance, this group of nerves is called the cauda equina – the Latin name for “horse’s tail.” The nerve groups travel through the spinal canal for a short distance before they exit the neural foramen.

Neurons are the “building blocks” of the nervous system. They’re long, thin cells that transmit electrical impulses, and have many branched endings, called dendrites, which receive impulses from other neurons. An axon, or nerve fiber, carries nerve impulses to other neurons or to muscle. Neurons do not touch, but are separated by a tiny gap called a synapse. When an impulse arrives at the end of an axon, it releases chemicals that generate an impulse in the dendrites of the neighboring neuron.

There are three types of neurons: sensory, motor and association.

Nerves are made up of bundles of both sensory and motor neurons.

Give Us A Call
Let Us Help

Give Us A Call
Let Us Help

Get Brain and
Spine Health Tips

Our goal is to improve your quality of life by providing excellent treatment in a forward-thinking culture.

Tell Us About Your Experience

Send us a Google review. Click this link and let us know how we did!

Review us on Yelp too.